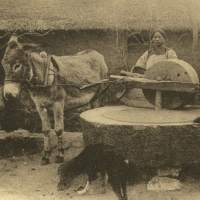 This is a donkey-powered rice mill in China. It makes use of an Edge Runner Stone rather than using a pair of flat millstones. To work it, the rice would be placed on the stationary lower stone. The donkey then drags the top vertical stone around the edge of this lower stone, thus grinding the rice. The produced flour would then be brushed into a bowl. You can see in this photograph the lady on the right holding a brush for this purpose.

Rice is the staple food for a substantial portion of the world’s population. Rice flour can be produced by grinding rice, which is used to thicken stews and soups, as well as making pancakes such as South Indian appams. Its popularity has also increased in recent years as rice flour doesn’t contain gluten.

The ladies in this image are working at a Franciscan Monastery in Chan-Tong, China. The Franciscans arrived as Missionaries to China in the 13th Century, with the first being Father John of Montecorvino. Throughout the 18th and 19th centuries there were waves of persecutions as Christianity was seen as a tool of foreign influence. However, relative peace was established in 1800 by the Treaty of Tianjin, and the religious orders returned en mass to China until they were once again expelled following the Communist Revolution.