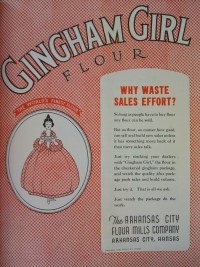 Here at the archives we have a unique collection of the Northwestern Miller stretching from 1897 to 1945. This incredible collection was rebound following a grant from the Mercer’s Company over 2500 copies were rebound in Scotland in 2016 improving their access for years to come. It contains many articles, images and features on mills and milling. Alongside this their advertisements give a fantastic insight into milling developments.

One such example is the use of the ‘Gingham Girl’. Many advertisements for flour were directed at the housewife, Gingham Girl Flour sort to use patterned packaging to encourage sales to the thrifty housewife for reuse as clothes. Flour packaging had already been reused for some time, however, it took a while for business to catch on to its potential. The first use of packaging in this way was the Gingham Girl, which proved to be a huge success; expanding into new gingham colours for men’s clothing and different ranges for women. The concept soon developed from just gingham patterns, and it wasn’t long before designs of all manner were adorning the family flour bags.

In the October 4th 1939 edition of the magazine, we see a fascinating campaign to increase doughnut sales. The Secretary to the National Doughnut Month Committee, Mr Plant, describes a number of publicity campaigns that would run throughout the Month.

These include a new shade of brown, ‘doughnut brown’, and women would be encouraged to wear their hair in the shape of a doughnut and airlines would give out free doughnuts on their flights. According to a later advert, in the September 26th edition for 1945 this scheme began in 1921 and by 1945 was in its seventeenth consecutive year.

The 1945 theme would be ‘at his back at home party’ and a thirty-two-page party booklet was to be given out describing party ideas and games, of course, centred on the doughnut. These days National Doughnut Day is celebrated in America on the first Friday of June in honour of Salvation Army Women who served doughnuts to soldiers during the Great War. If you want to get involved here in the UK there is a National Doughnut Week to raise money for the Children’s Trust.