Transactions of the Twelfth symposium of The International Molinological Society

TIMS Transactions contain all papers presented at our symposia and also give an impression of the symposium itself as well as the excursion. Topics covered include Over 40 years of Molinology – where Do we Stand?, Sugar Cane milling, Power Windmills in North America, The Stone Grinding Mills of the Churnet Valley, The origin of the Postmill – a Hypothesis, Regolfo watermills, Greek Windmill Sails, The Inclined Treadwheel, A tide mill in Portugal, A Typology of Watermills North of the Danube, Watermills at La Sauve Majeure in France, Liverpool Windmills, as well as a number of contributions on drainage and drainage mills. Full colour edition, 520 pages. All Transactions are A4 in size and contain many black and white photographs, drawings, etc. A heavy book! 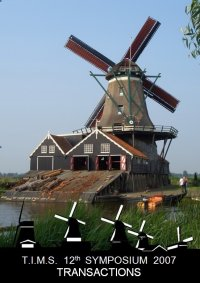 You're viewing: Transactions of the Twelfth symposium of The International Molinological Society £35.00
Add to basket