This is an account of three generations of outstanding traditional millwrights and engineers, all named John. Founded in 1812 at Louth, Lincolnshire, the business developed a reputation for good design, attention to detail and is credited with erecting some of the finest tower windmills in the United Kingdom. John Junior took advantage of the growing rail network to expand his core business in Lincolnshire to building advanced windmills as far afield as Eire. He was quick to adapt improving technology, and timber craftsmanship evolved into iron engineering with his own iron foundry.

The rapid advance of roller flour milling and the onset of a deep agricultural depression in the late 1870’s necessitated the seeking out of new ventures. The manufacture of brick and tile making machines and setting up and repair of steam power plant and engines became important. Clay working machinery was exported worldwide but increasing competition and better marketing by larger competitors caused a decline in the firm’s fortunes resulting in its closure in 1912, it centennial year. 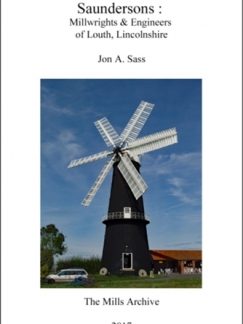 You're viewing: Saundersons: Millwrights and engineers of Louth, Lincolnshire £10.00
Add to basket