Bernard Forest De Belidor was born in Catalonia in 1697 and died in Paris in 1761. He became a professor of mathematics at a French artillery school. The book that made his reputation was Nouveau cours de mathématique, a text for artillery cadets and engineers. A second, Le bombardier françois, was for use in combat and contained systematic firing tables. It was with two fuller works, however— La Science des ingénieurs (1729) and Architecture hydraulique (1737–1739)—that Bélidor entered into the science of mechanics proper with a summons to builders to base design and practice on its principles. The first of these treatises was concerned primarily with fortifications, their erection and reduction and the second, Architecture hydraulique, embraced civil constructions. The choice of title was a reflection of the actual prominence of problems involving transport. shipbuilding, waterways, water supply, and ornamental fountains. 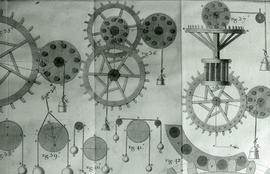