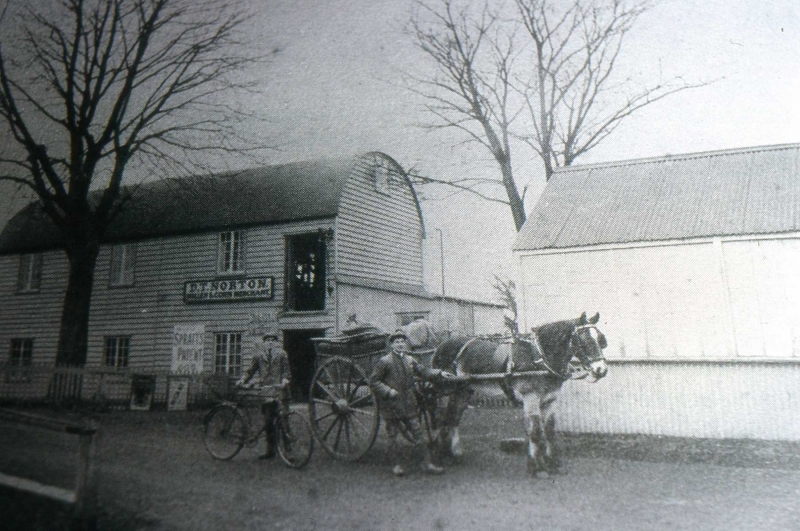 The mill by the ford at Eynsford can only be described as an unusual building, being a small white weatherboarded structure of two storeys, with a green-painted corrugated iron barrel-shaped roof. Its history is little known, but its failure to appear on early maps and the 'lightness' of its construction suggest that it is of recent origin, probably being built in the late nineteenth century. This is corroborated by map evidence, as the structure fails to appear on the 1867 Ordnance Survey map but is on the Second Edition of 1896. It is thought to have been originally in the Fellowes family, who ran the paper mill in the village for many years. The miller advertised an eight feet diameter by ten feet wide wheel for sale in 1885, although if he sold it the wheel was replaced as the Norton family worked it from about 1899 through to c.1912. The machinery was sold or transferred to one of Norton's other mills at this time except for the wheel, and the structure was leased to the father of Walter Millen, who rented it after his Westminster Mill downstream in Horton Kirby was burned down. He used the structure for packing shoelaces until the onset of the war; later the structure was house converted. Today the structure remains empty of machinery; the watercourses are interesting, as it is difficult to differentiate any specific channel of water for the mill; this was almost a true 'river' mill and had a low breastshot or perhaps undershot wheel, with the sluice controlling water flow situated under the ford.