A water-powered distillery mill in the historic county of Middlesex, England. 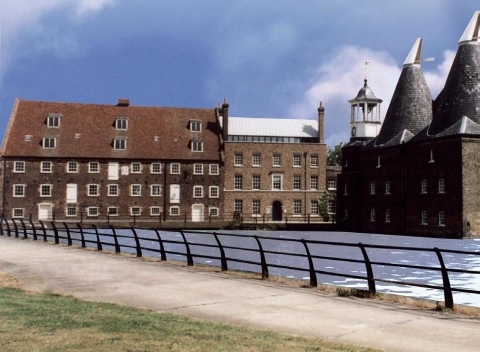 House Mill is a Grade I listed building on the River Lea in Bromley-by-Bow, London and is open every Sunday from May-Oct from 11-4pm and on some other Sundays throughout the year. The present House Mill was rebuilt in 1776 by Daniel Bisson. It was damaged by fire in 1802, and then rebuilt by Bisson again. The House Mill remains the largest tidal mill left standing in Britain, and indeed the world, although the water wheels no longer turn.

There were three mills here, House Mill, the Clock Mill, and a windmill. The first two still survive. House Mill is Grade I listed, and still contains milling components along with a collection of wooden patterns. The mill had 8 pairs of ‘Fairburn’ millstones and 4 sets of traditional stones.

It is the older of the two remaining Georgian tide mills. Originally built in 1776, it was rebuilt after a fire in 1802. Saved from demolition in the 1970s, restoration began in 1989. The ongoing project is for the repair all four water wheels and the internal machinery and that electricity can be generated and put back into the grid. The Grade II listed Clock Mill was built in 1817 and was in use as a mill up until 1952. The Windmill was here until approximately 1840. In 1588, one of the mills was described as a gunpowder mill. During the 16th century the three mills were reduced to two (which today are the House Mill and the Clock Mill). In the 17th century the mills were used to grind grain, which was then used to distil alcohol; the mills became a major supplier to the alcohol trade and gin palaces of London.

In 1878 there were seven undershot waterwheels at Three Mills. Most of them were around 20 ft in diameter and 3 ft in width, but one was 8 ft in width. There were four in the House Mill and three in the Clock Mill. They drove fourteen pairs of millstones and produced a total of 150 HP (112KW). The average output of the House Mill was about 2 tons of maize and 5 tons of barley per tide rising to 10 and 14 tons respectively on spring tides. The average weekly throughput of the two mills was 125 tons per week.

The House Mill continued to operate until 1940 and the Clock Mill until 1952.