A water-powered corn mill and electricity generating mill and saw mill in the historic county of Somerset, England. 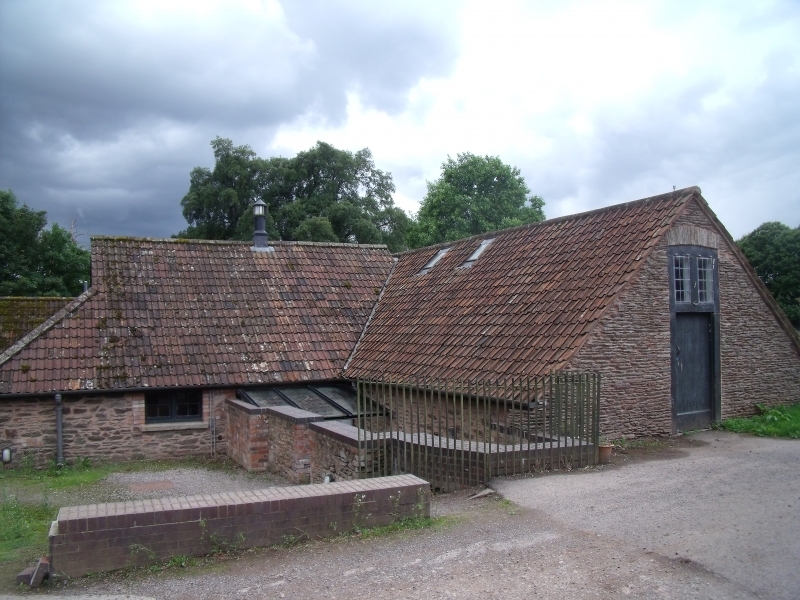 The first reference to a mill at Hestercombe is in December 1698 when a carpenter is recorded as undertaking repairs for Sir Francis Warre (1659-1718) for the sum of 15 shillings, possibly to replace some of the broad elm floorboards that still survive in the building today. The present structure probably dates from the mid-seventeenth century, although it is probable that a mill has occupied this site since the Warre family took possession of the Estate in the late fourteenth century.

For over two hundred years, the watermill supported the Hestercombe Estate by grinding its corn into flour, crushing its cider apples into pomace, and processing its 'magnificently timbered woods' into boards, planks, and posts. By 1750 the then thatched building housed two corn mills and an apple mill, with an apple loft above; by 1872 the corn mills were being driven 'by a 11½ ft over-shot (nearly new) Water Wheel' and over 350 acres (141.6 hectares) of the 776-acre (314-hectare) Estate were being described as 'corn land'.

Sometime before 1896 the Portman family converted the building to the estate timber mill and extended it eastwards to contain a Dynamo House. At about the same time a hydroelectric turbine built by the renowned firm of Gilbert Gilkes & Gordon Ltd of Kendall, Cumbria, was installed alongside the extension. The electricity produced was subsequently used to light Hestercombe House and in January 1897 a ball 'of a most complete and sumptuous character' was held to celebrate the new illumination. Dancing for the 200 invited guests did not conclude until 4am.

The upper storey of the mill was rebuilt in 1906-08 (clay pantiles, courses of local slate) to harmonise with Sir Edwin Lutyens' additions to the adjacent Formal Garden. By 1947 the milling of corn had long ceased and the only equipment remaining in the mill was a barely operable '3 feet blade saw'. Following the death of Mrs Portman in 1951, Hestercombe was turned over to the Crown Estate Commissioners and the surrounding farmland was let. The new tenant farmer subsequently converted the mill building to a piggery, a use that continued into the early 1990s. In the interim the lead flashings were stolen from the roof and incidents of vandalism occurred, causing the building to quickly fall into disrepair and become derelict.

The watermill and adjoining woodland barn were saved from imminent collapse by the intervention of the Hestercombe Gardens Trust. Work began on the £1.6m project to restore the buildings in March 2009, with funding provided by the Heritage Lottery Fund, Viridor Credits, and charitable gifts. The effort took twelve months to complete and the restored buildings were officially reopened in April of 2010.

When the restoration of the mill and barn complex began, conservators encountered structures riddled with insect and fungus damage (roof timbers and floor boards), damp, water egress, uneven floors, and decayed or missing pointing. Fortunately, the main structure of the cast- and wrought-iron waterwheel was found largely intact and did not require major restoration. The hurst frame corn mill was almost complete and in relatively good condition, but the heavily corroded and seized double vortex turbine was found to require major refurbishment. The 6 HP (4.41 kW) turbine was also updated to function in a modern hydroelectric generation system and is now capable of producing a maximum electrical output of 1,600 watts.

To underline the importance of watermills in the historical development of Somerset, a collection of waterwheel-powered Victorian agricultural machinery is now on display in the refurbished mill. This equipment was rescued in 1998 from Gerberstone Manor, West Buckland, Wellington, with the generous assistance of the Somerset Industrial Archaeological Society (SIAS).

From the late Victorian era into the 1930s, the owners of country houses invested heavily in new technologies as a way towards self-sufficiency. Acetylene gas plants were inexpensive and relatively trouble-free, producing a carburetted hydrogen gas for lighting by combining water with calcium carbide. This generated a brilliant white illumination, as at Holmrook Hall, Cumbria, and The Argory, Northern Ireland. Thermalume petrol air gas plants were also popular with estate owners due to their compactness, low cost, and ease of operation. They worked by vaporising petrol by agitation, and then introducing air in a specific ratio, usually 95% air to 5% petrol.

The Thermalume plant now on display in the Dynamo House was recently salvaged from a shed situated alongside a bungalow near Watchet, Somerset, by SIAS. It was in operation until the 1950s for lighting, cooking, and gas fires. The acetylene plant was rescued from Moredon House, North Curry, Somerset, in 2010.

Also on display in the Dynamo House is the 'Zone' type dynamo that converted the rotational energy of the Gilbert Gilkes & Gordon Ltd vortex turbine into electrical energy. Number NT48 was supplied by F.M. Newton Ltd, electrical engineers of Taunton (est. 1884), who also installed the Gilkes turbine in June 1895.

While the Hestercombe Gardens Trust has painstakingly restored the mill and barn buildings to reflect their history, we have also introduced the latest in sustainable technologies to better prepare these important structures for the future. A biomass boiler, under-floor heating, photovoltaics, double glazing, and insulation have all been installed to improve the buildings' performance, lower running costs, and provide a valuable educational resource.