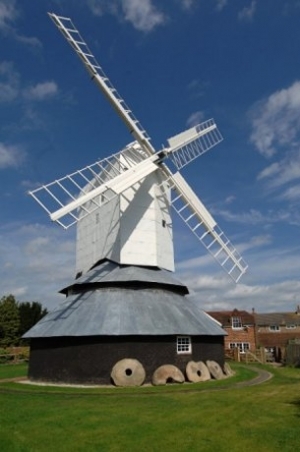 Windmill Hill post mill, the largest post mill in the south east, was built in 1814 with a single storey roundhouse. It was once owned by the Hammond family who were also millers at Clayton windmills. Alongside his duties as a miller, Charles Edwin Hammond invented a device to regulate the speed of the mill’s sweeps. He patented the 'sweep governor' in 1873 and installed one in Windmill Hill. It was one of only two made; the other has not survived.

During its life the mill was raised in order to catch the wind better. It is thought that the present two storey roundhouse was also built at this time. The roundhouse served both as protection for the timber trestle against the weather and also as a storage area for grain and flour. The roundhouse also has a 'second skin' around part of the mill which acts as extra storage. The mill has weathered several severe storms, including the hurricane of 1987 during which another Sussex post mill was blown over and destroyed.

The mill stands 15.5m (50ft 10ins) from ground level to the roof ridge. The weatherboarding on the mill body is covered in metal sheeting, looking as it did was when it last worked. Originally the mill was turned manually to wind by a wooden tail pole, this was replaced by a computer controlled automatic turning device installed at the base of the exterior ladder. Today the mill has four patent sweeps which can be adjusted simultaneously while the mill is working by operating a chain at the rear of the mill. The mill was set up with two sets of stones; a pair of Derbyshire peak stones in the head of the mill and French Burr stones in the rear or tail of the mill. When the mill’s sweeps were removed in 1894, the Derbyshire stones were also removed to the roundhouse and set up to work by steam power.

After standing derelict for over a century the Grade II* listed mill made headlines when it became the largest and most ambitious repair project undertaken in the UK. All of the mill’s timbers were recorded before the main body was transported for repair to the millwright's yard in Oxfordshire. The restoration took two and a half years to complete.