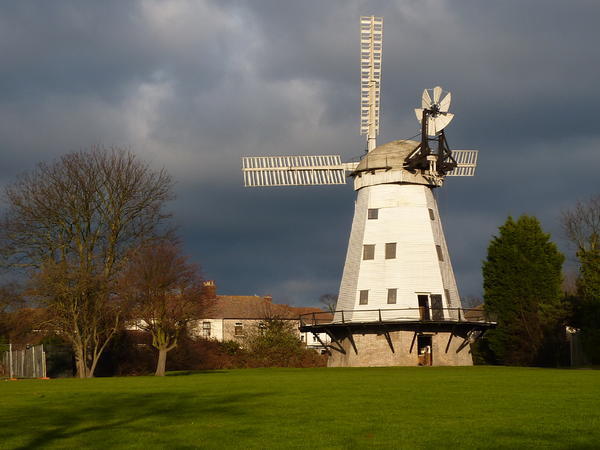 Upminster windmill is a Grade II* listed mill built by a local farmer, James Nokes, in 1803.

The mill is considered to be one of the best remaining English smock mills, due to its quality and setting. The four storey, eight sided smock is built on a single storey brick base. It has a stage at first floor level for access to the sails. The mill started its life with common canvas covered sails but these were later replaced by double shutter patent sails. In 1811 a steam engine was installed in an adjacent building to increase productivity by driving an extra 2 pairs of millstones. The mill now has four pairs of French Burr millstones, a flour dresser and oat crusher. This building and the tall chimney were demolished in 1960.

After the death of James Nokes in 1838 the estate was passed to his son Thomas. Due to the great deal of money that had been spent on necessary improvements, the estate had been heavily mortgaged. As a result, in 1849 the whole estate was put up for auction. The mill site was bought for £2,000 by Ambrose Colson and shortly after sold privately to James Wadeson. In 1857 Wadeson offered the entire estate to Thomas Abraham for £1,900. Although Abraham could not raise this sum, he could afford to buy the windmill. The mill stayed in the hands of the Abraham family for around a century; the last miller at Upminster was Alfred Abraham who died in 1959 aged 95.

In 1937 the mill was again up for sale and was acquired by Essex County Council, who intended to demolish the mill. Fortunately before this could occur there was a public outcry, the Council were accused of vandalism and as a result reversed their decision.

The mill continued to work, producing flour up to 1910 and thereafter grinding animal feed until 1934, by which time it had become uneconomic to continue. The mill with its many outbuildings, including two mill houses, became derelict.

Sadly, the outbuildings of the mill were demolished by Essex County Council in 1960. Nevertheless the Council did arrange for repairs to the remaining mill to be undertaken. These repairs and the help of volunteers enabled the mill to open to the public in 1967.

In 2001 the Friends of Upminster Mill group was established, followed in 2004 by the Upminster Windmill Preservation Trust who were granted a thirty five year lease on the mill. In 2007 the mill sustained considerable damage in high winds and as a result two new sails were fitted in August 2008 by the millwright Vincent Pargeter.

The mill is due to start major repairs with help from recently acquired funding. This will bring the mill back to working order with a visitor and education training centre. Havering Council, in partnership with the Upminster Preservation Trust, have received funding for developing the final grant application from The Heritage Lottery Fund.

Upminster Windmill is run by the Upminster Preservation Trust.