A wind-powered corn mill in the historic county of Surrey, England. 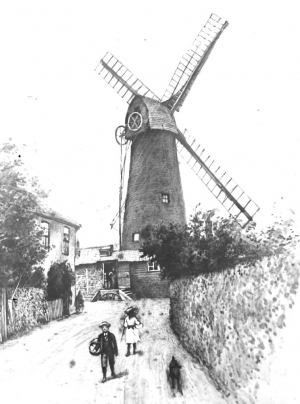 Brixton windmill is a five-storey tower mill, erected in 1816. In November the following year it was leased to Joshua Ashby, who took out a mortgage on the property in 1819. At that time, the land surrounding the mill property was open fields, though it is now densely developed. The mill presently stands in an open area which has been laid out as public gardens.

The mill was hand-winded throughout its working life, and originally had a wide stage surrounding the tower at first floor level from which the winding chain and the sail operating gear could be accessed. The mill was fitted with a pair of patent sails in 1827, retaining a pair of commons. Due to the site's proximity to London, which rapidly expanded during the 19th century, wind power had ceased to be used by about 1862. A photo taken around this time shows the windmill's two patent sails already devoid of their adjustable shutters. In 1864 the sails were removed and an 8 horse-power gas engine fitted to operate a new set of milling machinery. The mill retained its black waggon-shaped cap and windshaft, but the other wind-driven machinery was removed.

The mill was listed Grade II in 1951 and in 1957 the London County Council purchased the site. Unfortunately, in 1960 the outbuildings surrounding the windmill were demolished. In 1963-64 the mill was restored internally and externally by millwrights R Thompson & Son of Alford, Lincolnshire, so it resembled a windmill once again. A new wooden brake wheel was fitted to the existing cast-iron windshaft. A set of internal machinery comprising winding gear, wallower, upright shaft, spur gearing, millstones, stone furniture and tentering gear was salvaged from a derelict Lincolnshire tower mill, Hanson's Mill at Burgh le Marsh, and installed at Ashby's Mill. The surviving power-driven machinery at Brixton, which included a fine metal hurst frame supporting a pair of millstones, was retained and overhauled. A new set of sail frames, two common and two patent, were lifted into place with block and tackle. The mill was re-opened to the public in 1968, and was overhauled again in the mid-1980s when the cap was removed for repair. The latest phase of restoration was completed in 2011, when shutters were installed in the sails and the mill was reopened to the public.

The windmill stands 49ft tall to the ridge of the cap, and tapers from 22ft overall diameter at the base to 12ft overall diameter at curb level. The brake wheel, installed in the 1960s repairs, is of wooden clasp-arm construction, with iron section teeth, and is mounted on the cast-iron windshaft which survived from the mill's working days. This engages a cast-iron wallower, which has a friction rim below it to drive the sack hoist. The upper part of the upright shaft is of timber, changing to cast iron just below the bin floor. The great spur gear is of cast iron with wooden cogs. This engages a cast-iron stone nut with wooden cogs positioned above a single pair of Derbyshire Peak stones in a wooden vat. On the first floor, a set of tentering gear and a pair of centrifugal governors have been installed. On this floor are the hurst frame millstones, their driving gear being positioned on the ground floor.

Brixton Windmill is looked after by Friends of Windmill Gardens. In 2012 the Friends recieved a Museums and Heritage Award for Excellence.