A wind-powered corn mill in the historic county of Kent, England. 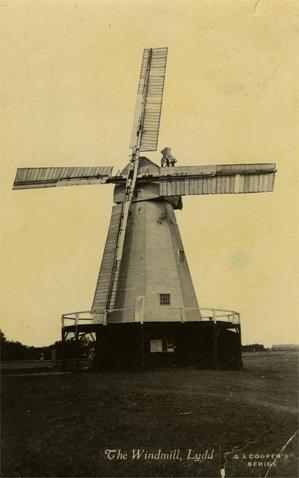 The new wind corn mill, a smock and stage mill of timber on a brick base, was also described as a round corn mill when it was built to distinguish it from the old timber post mill, dating from before 1600. For long periods both mills were in the same ownership. When the first lease for a plot of land was granted by the Baylif, Jurats and Commonalty of Lydd to John Longley, in October 1801, the new mill was already nearing completion, with its sweeps, sails, wheels, tackle, warehouses and structure. The subsequent leases and abstracts of title record the assignment of the leasehold of the mill for a period of nearly a century.

The early Marsh-based owners of the new mill, although often also graziers (principally sheep farmers) may also have been closely involved in its running. In 1830 the second owner Thomas Finn mortgaged the mill to John Jeken Kennett, surgeon of Eythorne, and following Kennett’s death in 1832 to Henry Elve of Dover, gentleman.

Following the death of Thomas Finn, the trustees of his estate, Francis Finn of Old Romney and Stephen Burgess and Charles Allen, both graziers of Lydd, attempted to sell the mill to pay off the mortgage. The first public auction of the mill, at the George Inn, Lydd in April 1847, failed to produce any bids and the trustees had no option but to transfer the legal title to Henry Elve, who remained in possession of the mill until his death in 1865. During this period the mill would have been run by tenants such as Stephen Birch, described as a yearly tenant (rental £60) in the 1865 sale publicity.

After the death of Henry Elve the mill was put up for auction again by Elve’s widow Ann Elve, and bought by Thomas Goble of Lydd, Miller (he may already have held the Old Mill by this time). The mill was now in the Marsh-based ownership of professional millers, the Gobles, who would have conducted the business themselves and who also built bakehouses on the site.

The new mill stayed in the possession of the Goble family for the rest of its existence. Thomas died in 1900 and one of his sons in 1904, and in 1905 the mill passed into the hands of the surviving son Thomas Joseph Goble. By this time the ownership of windmills had become far less profitable. The high grain prices during the French wars had early pushed the value of the New Mill to as high as £1155, but it later stabilised around £800, a figure which held for many years. In the early 20th century it was valued by Holmans of Canterbury at £720. The introduction of the roller flour mill, usually located in larger population centres, with nearby rail access (e.g. Ashford) brought about the decline of the small rural mills, which survived for a while longer by grinding livestock feed for the local farmers. It was perhaps convenient for the owners that both the Goble mills at Lydd were destroyed by fire; the Old Mill in 1900 and the New Mill (now stripped of its sweeps and used only as a store) in 1927.