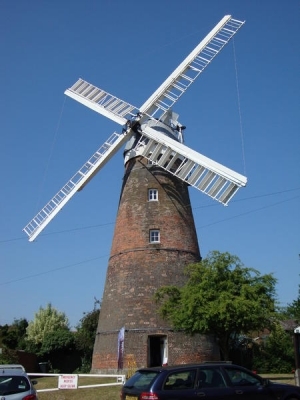 A tall brick tower mill with three pairs of overdriven millstones, Stansted Mill was built in 1787. The history and technology of the mill are well-described by Kenneth G. Farries in his five-volume work, Essex Windmills, Millers & Millwrights, published in the 1980s.

Beset with mechanical problems, the mill could not be run profitably in its last years of operation and became the source of a great deal of frustration for tenant and landlord. In the 1930s the mill was preserved for posterity by parish residents, assisted by the Windmill Section of the Society for the Protection of Ancient Buildings which launched an appeal for funds. Since the 1930s the mill has been repaired several times. In 2010, the cap of the mill was removed for repair, with the aim of eventually returning the windmill to full working order.

Stansted Mill was 'modernised' around the turn of the 20th century, gaining a fantail and patent sails with shutters that could all be adjusted simultaneously. Some of the internal machinery, dating from the time of the original construction, was retained, while other parts were replaced. The millstones are located on what is now the second floor and are overdriven by a large cast-iron great spur wheel. The brake wheel is of cast iron, mounted on an iron windshaft. The cap is dome-shaped with a rear extension that provided shelter for the original hand winding gear.