A wind-powered corn mill in the historic county of Lancashire, England. 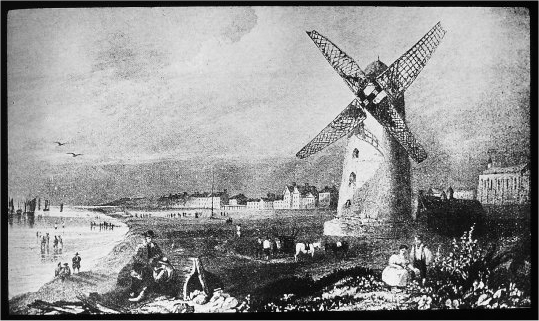 Lytham Mill is a well-known landmark, prominently situated close to the sea front. There was a windmill in Lytham as early as 1327. In the 17th century a post mill stood between Lytham Hall and St Cuthbert's church; by 1787, according to William Yate's map of Lancashire, there were two mills in this area. The present tower mill was built on a new site in 1805 when Richard Cookson applied to the Squire of Lytham for a plot of land on which to erect a windmill.

The mill continued working, latterly under William Swann, until New Year's Day 1919 when it caught fire and was burnt out. Two years later the mill was given to the people of Lytham and restored as a landmark. It was extensively repaired in the late 1980s and now carries four common sails and a skeleton fantail, and bits and pieces of machinery have been fitted. The mill is open as a local museum but does not work.

The windmill is built in the distinctive Lancashire style, a white-painted tower mill of four storeys with a black boat-shaped cap. Early illustrations show the mill as it was originally designed, with common sails and hand-winding gear at the rear of the cap. Late in the 19th century these features were replaced by a fantail and patent sails. The guide book indicates that the walled mound enclosing the mill's base was not built until ten years after the windmill's construction. It conveniently prevented animals and other users of the surrounding green from straying into the path of the turning sails. The distinctive building next to the mill is an old lifeboat station, now a museum.

Lytham windmill is looked after by the Lytham Heritage Group.