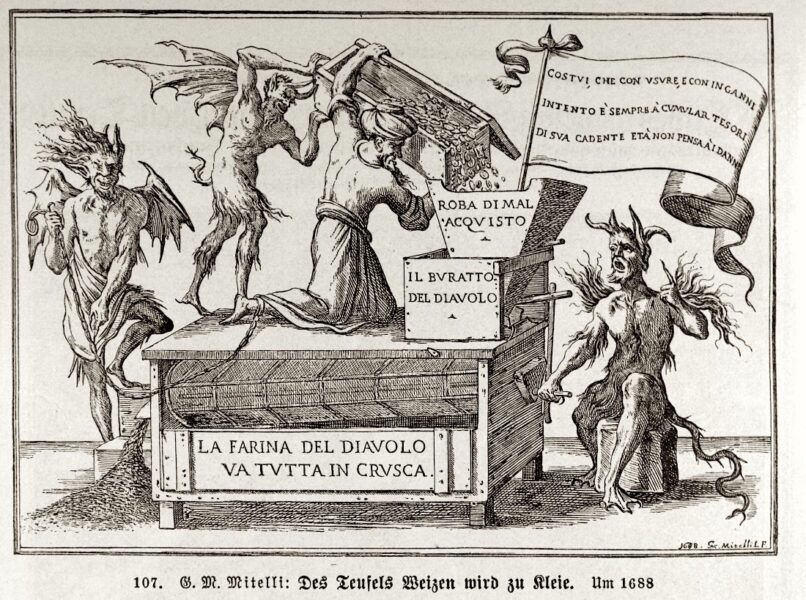 The devil becomes a miller

The cover of this Dutch book in the Mills Archive library shows a version of this story, although with windmills of iron and ice, instead of watermills.

In religious controversy mills have sometimes been used as symbols of error or heresy. The image below, titled Moulin d’erreur is a piece of Catholic polemic against the teachings of the protestant reformer John Calvin.

Calvinism is represented by the post mill, its sails turned by devils, with Calvin himself sitting on the top. The mill is surrounded by a moat, beyond which are the towns of Nîmes, La Rochelle, Sedan and Geneva – all at one time protestant strongholds. But the bridges to these towns have been broken, and only that to Geneva still remains intact – indicating that this town is the only one still ‘buying the flour’ of false teaching.

Another ‘mill of error’ is shown in this image:

Hugh Peters was a Puritan preacher who played a prominent role in the beheading of Charles I, leading eventually, after the restoration of the monarchy, to his own execution. The image comes from a broadside (an early form of printed leaflet) entitled ‘Don Pedro de Quixot, or in English the Right Reverend Hugh Peters’ – the windmill is a visual reference to the story of Don Quixote, and thus a way to imply that Hugh Peters has lost his mind. This appears to have been a standard part of the iconography of satirical engravings in this era – another example, although without the devil, is found in the image below.

This image shows John Goodwin, another controversial preacher of the same period. The speech scroll coming from his mouth reads “In all the Grists I Grind in Erreurs Mill/Unhappie I. I am mistaken still”, while above the winds of ‘pride’ and ‘error’ power the mill.