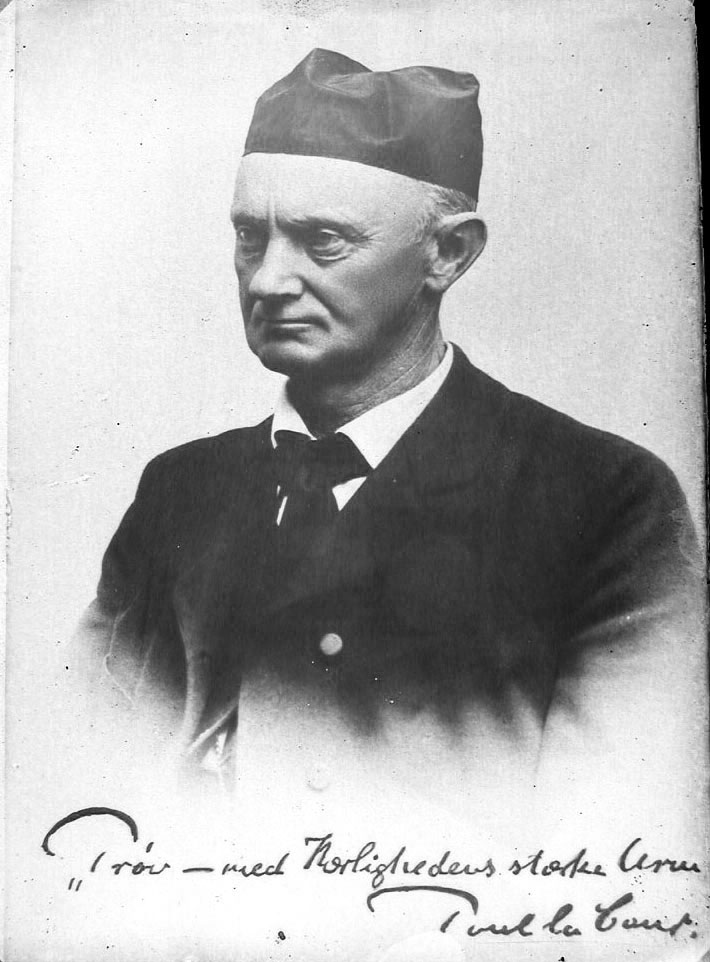 Poul la Cour was a Danish scientist born on the 13th of April 1846. La Cour was educated at Danish Randers Latin School before studying physics and mathematics at the University of Copenhagen in 1865. In 1869 he wrote his master’s thesis in meteorology. Following his education Poul travelled Europe to study practical meteorology, before becoming the deputy director of the Danish Meteorological Institute after its foundation in 1872. Later in the 1870s, he patented a telegraphic invention but faced protest to his American application from Alexander Graham Bell, Elisha Gray and others who were working along similar lines. Unfortunately, due to the legal fees Poul had to give up his claim for a patent in America and Elisha Gray was credited with the invention.

Following this, la Cour moved to Askov from Copenhagen to teach at Askov High School. It was here he began to pioneer the development of wind power. He had the idea of storing wind as hydrogen and oxygen energy by passing electricity through water. With a state grant from the Danish government, la Cour was able to build the first electricity producing windmill in Denmark between 1891 and 1892. However, he needed the mill to produce a constant power to drive the generator. For this he developed the Katrostat in 1892. This regulated the speed at which the turbine would turn.

After receiving further grants in the late 1890s, la Cour was able to build a larger energy-producing wind turbine, in addition to a test station so he could further develop his invention. This allowed him to develop and assess different blade profiles for wind turbines. This allowed la Cour to determine what the optimal length and shape of the blade should be, and his findings led to a design that resembles today’s wind turbine profile.

In 1902 Poul la Cour’s mill at Askov became a prototype electrical power plant and started serving the village of Askov with electrical power. This continued until 1958, 50 years after la Cour had died. In addition to his electricity generating turbine at Askov, la Cour established the Danish Wind Electricity Society (DVES) in 1903. Between 1903 and his death in 1908, la Cour was a consultant engineer for the DVES and planned a hundred small electricity power-plants with a third being based on wind power. He also assisted with the training of rural electricians. This training consisted of three months of theory with practical experience of maintaining and developing the Askov Wind Power Plant. They would then be finishing their training by building a small power plant in Denmark. Overall, Poul la Cour is rightly known as the first pioneer in the use of wind for generating electricity and inspired other prominent figures.