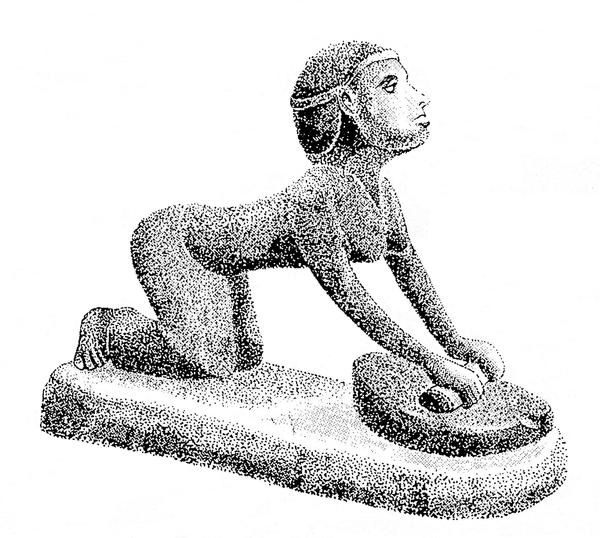 A saddle quern comprises a flat or dished slab of stone and a hand-held upper stone which is rubbed to and fro across it. Saddle querns were sometimes used in conjunction with mortars, in which grain was first pounded to remove the husks, but the flatter grinding surface of the lower stone was much more effective than the mortar for grinding grain sufficiently finely to obtain the maximum release of nutrients.

The saddle quern was generally worked on the ground, with the operator, usually a woman, kneeling behind it.  It was hard work, the user needing to exert enough pressure with the rubber to break open and reduce the grain to meal. The saddle quern is the mill referred to by Moses in the Old Testament and upon which Samson was made to grind in the prison house (Exodus 11.5, Judges 16.21).

From ancient Mesopotamian texts, throughout the Bible to the writings of historians such as William Harrison (see later), documentary and ethnographic evidence indicates that grinding foodstuffs on a quern is generally considered to be the work of women, slaves and prisoners.  Of course, there are exceptions.  All male enclaves such as armies and monasteries had their own querns and men also used querns to grind other materials such as ochre and, in due course, tobacco.

‘The maid-servant that is behind the mill’. Grinding grain on a saddle quern, after an Egyptian statuette. (Drawing by Martin Watts; MWAT-004)

Saddle querns have been found on some early Neolithic sites, such as the causewayed enclosures at Windmill Hill near Avebury in Wiltshire and Etton in Cambridgeshire.  They vary greatly in form from neat saddle-shaped stones, which give the tool its name, to chunky bowl shapes and large trough-shaped lower stones.

The saddle quern was the main means of grinding grain in Britain for some 3,500 years but in the Middle Iron Age, c.400BC, a new form of milling tool, the rotary quern was introduced.  Dating evidence suggests that it was first used in southern England, gradually spreading north and west to reach Scotland, Wales, Ireland and Cornwall by the first century BC.

The upper stone of a Romano British rotary quern from Probus, Cornwall

In 1898 Bennett and Elton wrote that the quern ‘virtually only exists as a relic of antiquity in the cabinets of the curious’.  But that is not the end of their story, for querns were to remain in daily use in the Northern and Western Isles of Scotland and in Ireland into the 20th century where they were not only used for preparing porridge but also for grinding barley for that illicit drink, poteen.  And, like the saddle quern, they are still used in parts of the world today.