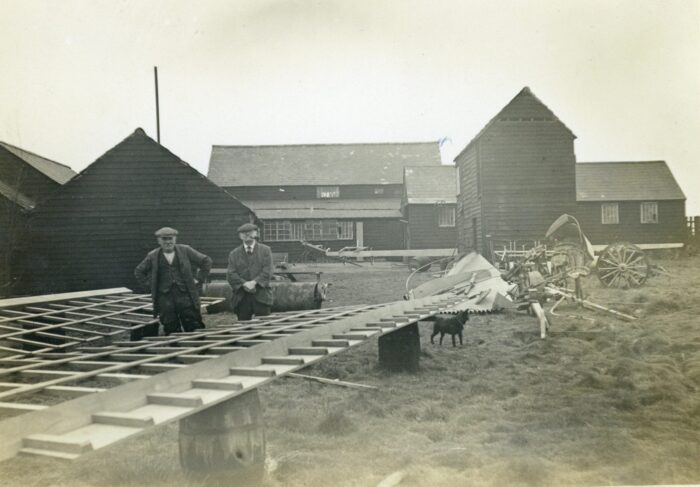 I arrive to find that Tom and Jack Hunt have been given sole charge of the undertaking. Tom, who has been disconnecting and removing the long iron ‘striking’ rod that tunnels the wind-shaft and automatically operates the sail shutters, is now aloft enjoying a few minutes rest. His position seems decidedly precarious.

‘Mind you don’t fall Tom’ calls Mrs Cattell. But Tom only smiles. He is standing on the sail buck which has been rotated into the horizontal position. True, he steadies himself with one hand, but later will be holding on to nothing save the heavy hammer with which he strikes, using both hands, on the great bolts uniting the ‘clamps’ to the back. For in this mill there are additional timbers or clamps on each side of the back which besides strengthening it help to prevent slipping in the eye.

Now we are ready to fix the pulley blocks and tackle with which to lower the first sail. Tom and Jack mount to fasten the chain at what for convenience may be designated the ‘poll hub’, i.e. the place where the two backs intersect each other as they pass through the metal eyes at the end of the wind-shaft. To the chain is hooked the upper pulley block, the lower being attached to the sail to be lowered. It is then that rain intervenes. And, as the millwright most carefully guards his expensive tackle against rain and damp, work is at once suspended. The tackle is removed and stored in the mill; and work being over for the day I mount to a seat upon the back to secure a final picture.

… Next day the bolts which fasten the sail whips to the back are removed and the sails carefully lowered. On the following day the back is removed. To accomplish this the wedges which help to hold it firmly in the eye have first to be hammered out. Then the bolts that hold the clamps to the back are removed; but only those above the eye and which would prevent the back slipping down. For the clamps are not removed. They come down with the great beam.

A great thing in windmillwrighting is to prevent bumping of sails and heavy beams against the windows and wall or the mill. And now it is that the miller assembles his friends. And as it is a great occasion his daughter must hurry and fetch the cat and the kitten! The miller is very proud of his cat and its mousing exploits at the mill.

We make a merry party as we pull on the ‘anti bump’ rope attached to the lower end of the back. We resemble a tug of war tea heaving then giving way for a moment so that the back swings backwards and forwards. This seesawing has the effect of snaking the beam downwards through the eye. At the same time the pulley-rope is fixed to a projection just inside the mill door so as to allow only a short drop from time to time. We are very careful not to let the back swing so as to strike the mill. We have calculated that the back will touch ground before it quite leaves the eye. And at last it does so.

The next problem is how to free the upper end from the eye, and the millwrights listen silently, yet with amusement, to the many suggestions of the onlookers as to how it should be done. The lower pulley block must be slipped up the back and given attachment to it at a point well above the centre. On the rope at the lower end of the beam traction is now made so as to draw this end away from the mill. But it must be powerful traction. At Denver we employed a motor car for this purpose, but it is apt to snap the rope by jerking. Instead, we fasten the rope to the axle of the miller’s cart, and the horse being led forwards the tackle is controlled so as simultaneously to lower the upper end of the back. Thus is the great beam gradually freed from the eye and laid slowly and surely to rest upon the ground. And then we found, as we had suspected from its straightness, that the back might have lasted for years more!

Reid goes on to recount trips to other mills including Soham Mere, Adventurers’ Fen, Steven’s Mill at Burwell and Big Betty near Nordelph. Sadly after 31 pages the typescript breaks off and the remainder is missing. We are fortunate however that this fascinating account was preserved among Rex Wailes’ papers and has now come to light.