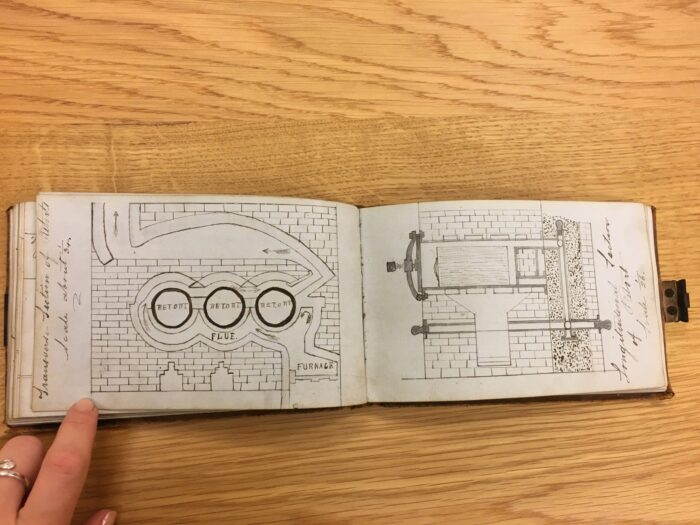 March marked about a year since my archive volunteer projects were put on hold due to the pandemic. I hadn’t been idle, I’d applied for and been accepted to do a master’s in Archives and Records Management, which was and still is keeping me busy, but I was restless. I am very grateful for my learning, but I missed doing something for archives.

So, it seemed like fate when at the beginning of March 2021, I saw on Twitter that The Mills Archive had used a grant from The National Archives to create ‘Archives @ Home Hub’ so that their material could be catalogued and transcribed remotely by volunteers. They were asking for people to get started and test the system. I instantly felt that buzz of excitement that I used to feel when I woke up to a day of archive volunteering. I replied to the tweet and sent an enquiry form (I was determined) and after a couple of exchanged emails I had an account and was assigned my first document to transcribe. Which was an 1871 notebook from the Waltham Abbey Royal Gunpowder Factory, which describes the processes carried out in the mills.

Having done a little bit of transcription before (The Highlands and Islands transcription project) I was aware that I not only enjoyed transcription, but also the journey of overcoming the problems that inevitably arose from it. It is this journey that I’d like to describe, because at some points it’s interesting, some points frustrating, often funny in hindsight and always a learning curve.

The problems, I think, arise mostly from three points:

Now, I’m quite good at checking my instinct and reasonably familiar with 19th century handwriting but I know nothing about milling and nothing about gunpowder, so I thought I had my weaknesses in check. But as it turns out, I had to fight my instinct first.

One rule of transcription in that the words must be transcribed as seen. Spelling mistake? Transcribe it spelt wrong. No punctuation? Put none there. My problem was capital letters, seemingly random. In the first section the word ‘cooler’ appears three times. The first time as ‘Coolers’ and my instinct thought the second time as well, I wrote it with a capital. Luckily as much as my instinct was working against me, it was also working with me and I knew something wasn’t right. My eyes flicked back to the document and I saw the word as it was, with a ‘c’. This rule is one that becomes a kind of habit as you get further into the transcriptions and get used to it, but at first it does take some getting used to. Plus, once you’ve identified a rogue capitalisation then you’re always ready for more.

My next challenge was both handwriting and lack of gunpowder knowledge. Imagine looking at a word that you don’t know exists and that is written in beautiful, curly, slanted 19th century script. It was time for detective work. I guessed it was an object, and important because it was in the middle of a sentence and started with a capital S. I figured that the best thing to Google was ‘how was gunpowder made’ (the sensible part of me was a bit nervous about this being in my search history without context). I was lucky, the first thing that came up were three elements that earlier Chinese alchemists used, one of which was saltpeter (spelt Saltpetre in the Waltham Abbey document). Detective work complete, I appreciated my luck, Poirot never worked things out that quickly, and I thanked Google for its existence. Just to double check I typed in Saltpetre and after a bit about curing meat, Britannica.com confirmed that it was otherwise known as potassium nitrate, was formed in certain soils and, most importantly, that there was a demand for it as an ingredient in gunpowder. I was now certain that this was my mystery word.

It is these small challenges and the subsequent (hopefully) victories, that I’d like to document in a mini-series about transcription. It is something that I and surely many others love to do and something that has the possibility to take the transcriber on a journey, not just deciphering handwriting, but learning, in this case about milling and gunpowder manufacture. I find it wonderful to think that with material in archives all over the world, the possibilities are endless.

See here for more about our transcription project