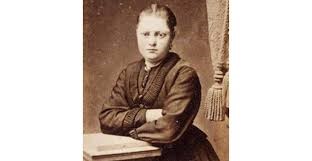 Born in Stockholm in 1732, she was the eldest of three daughters of the book printer/bookkeeper (sources differ) Johan Bruhn who had died during their childhood in 1742.  Three weeks after his death her mother Inga Christina was awarded a licence from the Swedish Board of Trade allowing her to establish a tapestry and wallpaper manufacturing business. Sadly, she died only 9 years later leaving Maria Christina in charge of the business and caring for her sisters. She quickly became well used to working with paper, fabrics and varnish.

At the beginning of the reign of King Gustav III a large reward was announced by the Royal Swedish Academy of Sciences for anyone who could invent a way of improving the ways in which gunpowder was handled.  This involved both the barrels in which gunpowder was stored and the cartouches, which were a kind of paper or cloth bag that contained the powder charge inside the cannons. The gunpowder had to be protected from moisture and heat and there had to be no blockage or left residue inside the bore once the shot had been fired.

Maria Christina first heard about the competition probably through friends in high places – her sister’s husband engineer Hieronymus von der Burg had introduced her to Nils Lindholm and Pehr Lehnberg.  These gentlemen were professors working for the military, but were also members of the Royal Swedish Academy of Sciences. This body was to assess entries to the competition. She did not get involved in the manufacture of gunpowder barrels but believed that her work experience would make it possible to improve the design of cartouches.

As she explained, in the course of her work Maria Christina often experimented and on 2 March 1774, she presented to the academy her idea; “the waterproof and fireproof varnished cartouche”, creating cartridges out of paper which she then varnished.  However, as a female inventor she was met with extreme scepticism.  The Academy organised a test-firing of her cartouches, which had good results but unfortunately some residue was left by the cartouche in the cannon, resulting in the bore being blocked.  Her main competitor was Reinhold von Anrep, General of the Artillery.  His test firing was even less successful, and as a result both were rejected and the project ground to a halt.

Maria Christina did not give up there and worked on modifications to her initial invention by adding a thin piece of fabric to one end of the cartouche.  At her own expense, she supplied her cartouches to the cadet corps for their military exercises until 1780, without further problems. But further problems arose, in this case in the form of Major Per Gustaf Wagenfelt, who stole her design, claiming it as his own, and went on to receive a royal reward of 500 riksdaler. However, this act of industrial espionage came to the knowledge of a Captain Lindfeldt who warned Maria Christina and in 1783 she wrote to the War Office claiming her rightful credit and the prize money.  Many of those involved attempted to wash their hands of the matter, not wanting to cast aspersions on important figures but she persisted and after many letters, claims and counter claims she won out.  Three whole years later in August 1786 her cartridges were judged the best and most affordable. So, in all likelihood Maria Christina became the first patented female inventor of her country!

Maria Christina then closed her tapestry and wallpaper workshop and returned to her private life, living partly on the proceeds of her prize money.  She died in 1808 aged 77.