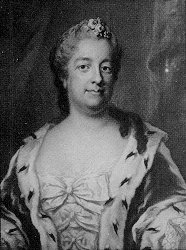 Countess Eva Ekeblad née Eva De La Gardie (10/07/1724 – 15/05/1786) was born into the Swedish aristocracy, and was a salon hostess, scientist and  agronomist. She was married to politician Count Claesson Ekeblad  at the age of 16 and they had 7 children in all.

She became known as an agronomist – “An expert in the science of soil management and crop production”, according to the OED.

Her achievements are all the more impressive in that she could have had a life of leisure but her husband travelled away often on business and she took on the responsibility of managing the family’s estates. She also started working as an agronomist in the castle’s kitchens and in 1746 began experimenting with the humble potato, with far-fetching results – at one stroke she improved Swedish eating habits and reduced famine frequency.

Potatoes had been introduced into Sweden in 1658, but were cultivated mainly in the greenhouses of the aristocracy; otherwise being used as animal food despite some reports that other countries were beginning to use it to provide alcohol.  In 1746 she discovered the most advanced method to extract starch from potatoes to make flour, which paved the way for vodka distillation and freeing the supply of wheat, rye and barley for making bread – in a time when much of Europe including Sweden, suffered from frequent food shortages and famines.  There was also a marked spike in alcohol consumption across northern Europe.

As a result of this, in 1748 at the age of 24 she became the first female scientist in the world to be  inducted into the Royal Swedish Academy of Sciences – unfortunately,  three years later she was reduced to an honorary member purely because of her gender. However, she remained its only female inductee for 200 years until nuclear physicist Lise Meitner was admitted in 1951.

As a by-product of her research, in 1751, she created a unique soap from potatoes to bleach cotton, yarn and other textiles in place of toxic dyes and in 1752, she discovered that potato flour could replace arsenic in face and wig powders, making life a lot safer for those in high society!

After her husband’s death, she took on a number of roles within the royal court in Stockholm, serving as lady in waiting to Queen Sophia Magdalena, as Mistress of the Robes and was governess to Crown Prince Gustav IV Adolf, whose birth she was said to have witnessed. A popular and much celebrated member of the court, she died aged 61 in 1786.

The Why Culture – Everything about the Swedish Agronomist