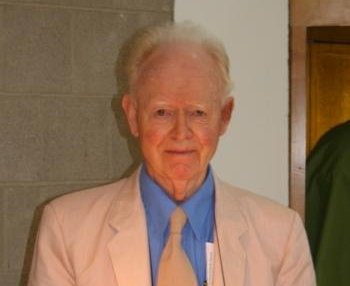 Niall’s active interest in mills began when Wimbledon Common windmill, close to his home in New Malden, was restored and opened as a mill museum in 1976. He and his wife Julie acted as weekend guides there and organised the rota faithfully for many years. When he retired from the civil service, with the rank of principal statistician, Niall soon became known to SPAB Mill Section members as a keen mill enthusiast, attending meetings and participating in excursions. His pale khaki fatigues, with bush hat perched on top of his head and glasses dangling by a cord round his neck, were a regular feature of mill outings.

Niall brought a wide perspective to his new hobby, as he had worked for OECD on agricultural statistics and lived in Paris for eight years. His travels included notably four separate trips in the 1980s and in 1996 to the Caribbean islands, the study of whose sugar mills he made his special ‘corner’ in TIMS, an international organisation which he joined in 1982. He participated in six TIMS symposia.

Over a period of about twenty years, Niall contributed articles on milling subjects to TIMS symposia and journals, as well as to the conference proceedings of the Mills Research Group and occasional pieces for the organs of regional mill groups: see the select bibliography below. Most of these grew out of his own holidays, like a trip to the Far East in 1987 which led to work on Chinese millstones, and OECD visits which took him within range of interesting mills. His chief areas of expertise became sugar mills and aspects of millstone technology, plus his interest in the minor technical points of mill machinery that attract molinologists because they represent different solutions to certain standard problems – sack hoists were one such for Niall. He relished identifying and researching a technical problem and kept precise notes of his own mill visits, as in Dorset and Ireland, for example.

In all these fields Niall made valuable contributions, in part due to his tenacious approach and to his refusal to accept shoddy or ill-expressed opinions. Ultra conscientious and precise about wording, he was reluctant to compromise and concerned to get things right at all costs, so he drove himself hard over details, no matter how dry, as is shown by his thorough and painstaking summary of the papers presented on the drainage mills day at the Dutch symposium and published in the 12th Transactions. His training and experience as a civil servant, especially drafting documents, equipped him for such tasks, thankless in the eyes of lesser mortals.

The Windmill gazetteer, a long-term project of the Mills Research Group, was saved from stagnating in an incomplete state and seen through to publication by Niall at great personal effort.

Niall was commendably loyal to organisations like the MRG and the Mills Section, yet he stuck to his own ideas, which differed from the pronouncements of William Morris (no less!) over the restoration of mills, not necessarily, in Niall’s mind, to be limited to conservative repair to the last working state. Brandishing the cudgels against juggernaut authority was another challenge Niall did not shirk. He fought local causes in New Malden. As a very committed traditional Roman Catholic, he braved papal displeasure by backing the bishops who held out for the Latin rite. Indeed as a devout Catholic, the mill article that may have given him the greatest satisfaction was his erudite and recondite paper on “Some eucharistic mills”, beautifully illustrated from medieval manuscripts.

Niall’s wife Julie shared in many of his molinological activities and was a familiar figure at Mills Section meetings. She survives him, with their four children and seven grandchildren and, hopefully, at one family home or another, some of his much loved cats.

PAPERS AND ARTICLES ON MILL SUBJECTS WRITTEN BY NIALL ROBERTS