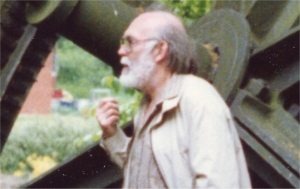 Alan’s lifetime of work with his wife, Glenys, ensured a lasting respect for a formidable legacy of research work in industrial archaeology and particularly in the study of gunpowder mills, paper mills and water turbines. Although they published separately from time to time, it was their team work and their energy that transformed some of these neglected research areas, providing exemplars of detailed and systematic studies.

Alan was born in Pontypridd on 6 October 1935 and studied mathematics at Imperial College London before starting a PhD in theoretical metallurgy at Sheffield University in 1956. More importantly, having danced with Astronomer Royal Richard Wooley earlier that year, he joined the University Folk Dance Club and met Glenys.

After university Alan joined the Physics Department at Battersea College of Technology, which grew to be the University of Surrey. He became Professor of Physics and Chairman of the Delegacy at the University. He specialised in theoretical research on the fracture of polycrystalline materials, particularly steel at low temperatures. After retiring in 1997, he returned almost immediately as part-time Professor Emeritus to carry on teaching and theoretical metallurgical modelling. In 1999 he delivered the Rolt Memorial Lecture on early water turbines in the British Isles.

He and Glenys were deeply involved in IA research “specialising in topics which we felt had been neglected by others”. Among these were Surrey paper mills, gunpowder mills, water turbines and the knitting industry. These developed into national and international interests, in turn attracting more attention from other researchers.

Alan was a founder member of the Board of the Waltham Abbey Royal Gunpowder Mills Co Ltd and, with Glenys, he was involved in founding the Gunpowder Mills Study Group. He set up the Surrey Industrial History Group as part of the Surrey Archaeological Society, both of which were fortunate to have him as a President. Alan founded the British Association of Paper Historians with Richard Hills and others in 1989 and followed Richard as Chairman in 1995. He served as Chairman of the Gunpowder Mills Study Group as well acting for a brief period as an emergency Chairman of the SPAB Windmill and Watermill Section.

Alan and Glenys strongly supported the Mills Archive since it started in 2002. They were active participants at “chaotic but enjoyable and well-attended” meetings of the Mills Research Group. His papers there included (in 2009) a detailed analysis of British mill espionage in 1800-1802 and (in 2003) a brave attempt to explain Green’s theorem using his coffee mug as a visual aid.

Alan Crocker died on 22 June 2018, leaving Glenys, their son Gareth and a wide group of admirers.