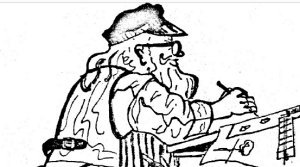 Don Paterson was a great lover of Lancashire mills with roots at Bretherton.  In 1982 he and Mildred Cookson decided to start up a North West Mills Group with Don as the chairman.  They produced a newsletter of which Don was the editor until 2000, he then went on to produce the annual review for the group. Don published many of his own articles on a variety of milling themes, with lively pen sketches adding distinctive illustrations.

Don was dedicated to research his whole life and he frequently stayed with his father at Bretherton, conducting his Lancashire research from there.  He always attended the North West Mills Group meetings and was made an honorary member.  As he lived in Essex, Don became involved with Upminster mill and tithe barn.  He was a member of the Mills Section of SPAB (Society for the Protection of Ancient Buildings) and was always ready to give help when asked.  He was very good at illustrating not only with drawings of mills and machinery but also cartoons.  He also ran the Mills section bookshop for many years and sold books at meetings, as well as largely contributing to putting the sections archive into order.

During the latter part of his life he moved south and lived in Romford. His house at Romford was more like a museum than a house, packed with everything from small mill artefacts to full size ploughs.  He had an excellent sense of humour and a deep laugh.