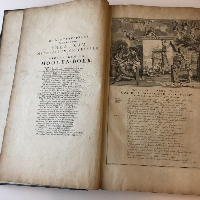 One of the oldest books in our collection, a guide for centuries of millwrights.

This fascinating Gem is an enormous folio-sized book called the Theatrum Machinarum Universale of Groot Algemeen Moolen Boek, which translates as the Universal Theatre of Machines or Large General Mills Book. It was produced by Johannis van Zyl and Jan Schenk as a reference book for millwrights and mill owners, and it contains highly detailed designs of mills for driving a variety of different functions. The copy that we hold in the Archive dates back to 1734, making it one of the oldest books in our library. What makes it such a Gem is its truly collosal size: it measures almost two foot high, making it by far the largest book in our collection, as well as one of the oldest. Its size means that the drawings inside it are very large, too: making it easier to properly see them and appreciate the scale and detail of work.

The designs are truly magnificent: they are a combination of impressive feats of engineering and beautiful works of art. For example, one of the Netherland’s famous drainage mills is drawn with a geometric star-like wheel, which was as complex in its technicality as its aesthetics. It’s amazing to think that these extremely neat and precise drawings were all done by hand – these days we are used to technical drawings of this type being done on a computer. Drainage mills such as this were very common in the low, flat Netherlands as they were used to move water from one level to another, creating large lakes and reclaiming the land, making the Netherlands as we now know it.

One common theme between the mills is the large protruding pole from the caps of the mills. This design was down to the lack of fantails on Dutch Mills; instead, the caps would be turned by hand.

Every one of these illustrations is a work of art, whilst also representing the transferring of lifetimes of millwork. It is amazing to think of all those skilled millwrights who have used this book to create such a fantastic Theatre of Machines.

Categories: Art and Artists, Gems of the Archive, Made to Measure, Mills with Unusual Functions