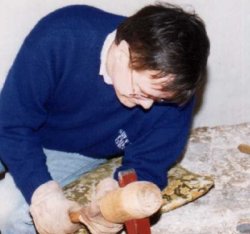 Peter grew up in Bedfordshire, and it was here that his interest in mills was kindled. He visited Stevington post mill while still at school, and was so fascinated by it that began to look at more mills, and learn about them. He began to research the local mills, but then the family moved to Suffolk where windmills were much more plentiful.

Peter trained as a quantity surveyor, and joined the staff of Suffolk County Council. Whilst working there, he was asked to write a specification for the repair of Dalham smock mill, which was to be repaired. Although some of the work was implemented, lack of funds and other problems halted work, and it remained unfinished, much to Peter’s disgust.

In 1975, voluntary work began on Ramsey Mill in Essex, and here Peter learned millwrighting skills from ‘old hands’ like Chris Hullcoop. Spare time was spent surveying Suffolk watermills, and when Minsmere East Bridge Mill collapsed, he helped dismantle it and pre-pared measured drawings as a record. Subsequent to this, the mill was rebuilt at the Stowmarket Open Air Museum, using his drawings as a basis for the reconstruction.

Suffolk Mills Group was formed in 1977 by a group of enthusiasts, and Peter became the first Hon. Secretary, a post he held with only one short break until his death. He was prolific in his writings for the Mills Group Newsletter, which included the well-researched Vanished Mills series. In 1978 he published Windmills in Suffolk – a Contemporary Survey, which was a complete record of the existing mills in the ‘Arthur Smith’ style. The book was a best seller, and is now much sought after. This was followed by Lincolnshire Windmills in the same format, in 1986.

Peter enjoyed working windmills, and started running Herringfleet Drainage Mill on regular occasions. He really wanted his own mill, and negotiated to take Syleham Mill on a lease, but satisfactory terms could not be agreed. Later, in 1979, he led the successful purchase of Thelnetham Mill by a group of enthusiasts.

The Thelnetham restoration must be considered to be one of the most important restorations in recent times, with the mill being taken from a hopeless derelict to full working order in seven years. Peter was instrumental in the work, and as soon as it was finished, took a lease on Thorington Street watermill, which he also repaired and got going again. In recognition of his contribution to mills, he was awarded a Windmill Certificate by the SPAB in 1987. At about this time he met Melanie Morgan, and they married in 1989. The couple moved into a house in Bramford where they lived for the next few years. Son Matthew was born in 1990, followed by Gregory in 1992.

In 1998, Peter joined the Committee of SPAB Mills Section, and was active in organising meetings, tours etc. from then on. In his spare time, he milled regularly at Thelnetham, and built up a significant organic flour business. In 1997 and 1999 his wholemeal flour won ‘Best in Class’ at the Organic Food Awards.

When Stanton Mill came up for sale in 1994, Peter jumped at the chance to own a mill himself. The family moved into the Mill House, and Peter began the task of restoring the mill. Although saved by the late Richard Duke some years before, much work was needed to bring it up to safe, authentic working order. The restoration was all but complete when Peter died on 4th July 2002. At his funeral on 17th July, the Chapel was not large enough to hold all the mourners who came from far and wide to pay their last respects.