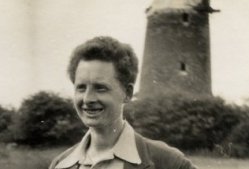 Harry Meyer was a mill enthusiast who from the 1920s to the 1940s carried out cycle trips taking photographs of windmills throughout England.

Harry was the son of Heinrich Freidrich Ludwig Meyer, a music teacher born in Hanover, Germany. Heinrich married Lillian Harriet Smith, 22 years his junior, in Lewisham in 1895. They had two children, Lilian Doris Meyer (known as Doris), born 9 January 1897, Lewisham, and Henry Smith Meyer (known as Harry), born 11 August 1900, Lewisham. By 1911 the family were living at 17 Sydenham Park, Sydenham. In 1922 they moved to Letchworth, living at The Haven, 5 Souberie Avenue where Heinrich died in 1928 and Lillian in 1945.

Doris and Harry continued to live together in Letchworth for the remainder of their lives. Harry was a self-taught woodworker and Doris was a graphic designer and illustrated books for several naturalists. Both the Meyers were interested in Botany, with Doris drawing and Harry photographing plants and landscapes, and they were members of the Letchworth Naturalists Society. Harry was a vegetarian and a Quaker. He was enthusiatic about windmills, attending and contributing to discussions at at least one of Rex Wailes’ Newcomen Society papers, and cycling throughout the country taking photographs.

Harry died in September 1982, aged 82. His ashes were scattered on Norton Common. Doris died in January 1983 in Hitchin.