Much has been published on African slavery and sugar mill technology, but rarely together. This work balances both topics using a case study of one planter family operating on two Caribbean sugar islands St Kitts and Nevis and concludes that, as in British industry generally, it is inappropriate to separate the work force from the technology.

The application of sugar mill technology to the Caribbean addresses the importance of topography, the lack of wind and rain, the uncertainty of hurricanes, and the ease of repair or availability of spares in a frontier environment. Mill work was particularly stressful due to the nature of sugar cane, its long gestation and rapid spoiling combined with breakdowns, unguarded machinery, long shifts, and ambitious overseers.

Research on any aspect of slavery quickly becomes harrowing. Men, women and children were enslaved, then transported in deplorable conditions in which many died. Those who survived and their descendants, were over-worked and often mentally, physically and sexually abused on plantations. It becomes necessary to lace every sentence with condemnation of the evils of slavery.

Historians, such as David Olusoga, have stressed the neglect of the significance of slavery and slave-grown staples in the history of British industrialisation. Indeed early industrialisation was made possible by the exponential increase in enslaved labour in the colonies to produce the necessary raw materials. Recent studies have shown that thousands of British citizens owned enslaved workers on sugar plantations in the Caribbean.

The enslaved workforce had a direct input to the wealth and success of the planter and the home country but plantation workers have traditionally been seen as chattels, working on distant colonies, with little relevance to British industrial history in general, or mill history in particular. Modern research requires a wider view, which takes into consideration the human factor.

Dr Stuart M Nisbet has published extensively on aspects of slavery, mills and the history of Scotland, with a particular emphasis on Glasgow including a detailed study of two of the city’s earliest pioneers on sugar plantations in the Leeward Islands. 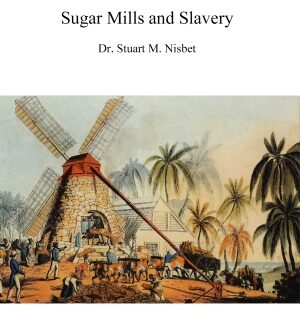 You're viewing: Sugar Mills and Slavery £10.00
Add to basket