Charles S. Boyer’s interest in the history of Southern New Jersey and his research into the lesser known aspects of that history continued throughout his lifetime. His published articles and works on the subject are well known to those sharing his interest. His search for information about early mills in New Jersey was unfinished at this death on November 10, 1936, but the results of his investigation were recorded in a partially completed preliminary manuscript. Such manuscript was retained by his widow, Anna DeRousse Boyer, until her death on August 14, 1958. In accordance with direction in her will, it is published in in incomplete form to make the historical data therein publicly available. 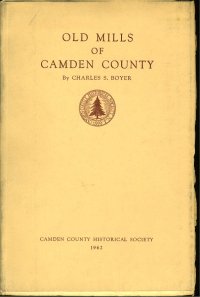 You're viewing: Old mills of Camden County £18.00
Add to basket