A5 booklet 120pp French language, many b/w illustrations; an in-depth study on various aspects of watermills and windmills, told in two parts.

The first part discusses the development of mills from their very primitive roots in ancient history- from the Ancient Egyptians and Ancient Greeks to modern day mills. Discusses the history of the production of corn and cereals right from Neolithic times. The main themes are the progression from human and animal powered systems to more complicated wind and water mill systems.

Discusses the history of the word “Moulin/ Mill” from its Latin roots. Discusses how far mills are essentially the reflection of a society- of its evolution, development and why it is important to keep the memory of them alive; how important it is for people to learn about the history of them, as they were once an essential part of French life, particularly in the countryside.

The second part discusses the regulations on mills, the decline of traditional mills and the methods of safeguarding traditional wind and water mills. Gives more detailed information on the development of different forms of mill- pivots, wheels, building shapes, and their developments over time. Includes detailed plans of various parts of the mills, such as the sails, and wheels. Attempts to decipher which design or structural type of water mill came first, ‘the horizontal wheel.’

Lastly, the traditional tales and folklore of millwrights and mill workers are discussed, as well as the symbolic meaning of mills. 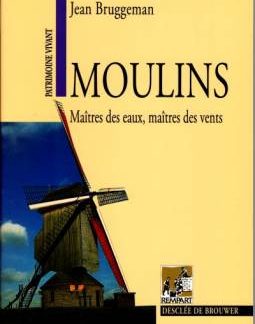