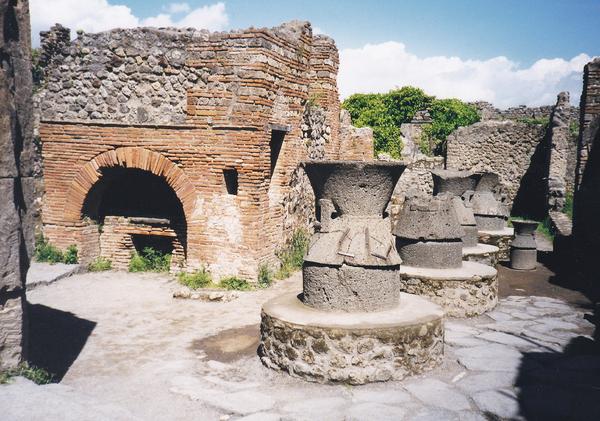 The application of animal and water power: From the Mediterranean to Britain

One, now reconstructed in the Museum of London, was found below Princes Street, London, in the 1920s.

As well as water-driven millstones, Pliny the Elder (AD23-79) implies that water-powered pestles were used in Italy in the 1st century AD for hulling and pounding grain (Natural History 18.23). Other literary references to milling in classical sources indicate a growing familiarity with such technology, the millstones being powered by human muscles, animals or water.  Diocletian’s Edict of AD301 set down the prices of a watermill, horse mill, donkey mill and hand mill and later in the 4th century the agriculturalist Palladius considered that watermills made both animal and human effort unnecessary and suggested using the outflow of water from baths to drive waterwheels (On Agriculture I.41(42)).