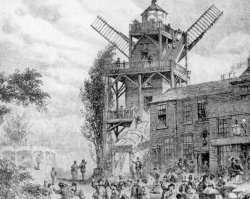 My Dad, Leslie Charles Chapman, was born in Kingston, Surrey on 17 May 1908 about a month after his older 4 year old brother died, his father was a cobbler with a shop in Kingston and Teddington, he died when my Dad was only 5 years old and his brother only 15 months old. My Dad was sent to boarding school in St Albans … he left school at 15 and became an apprentice carpenter, cabinet maker, and he became a master of his craft. His interests were W-I-D-E and varied, stamps, coins, old tools, miniature bottles of alcohol (but he never drank), cycling, wood, nails, screws, tins, steam railways, old cars, war memorabilia – ANYTHING unusual, he could have opened his own museum.

During the war he was a fireman with London Fire Brigade and was on duty for some of London’s worst bombings, he had some amazing tales to tell. He met my Mum in 1936 and they finally married in 1941, even that was a day to remember, the church was bombed a couple of days before the wedding, so they got married in Cavendish’s furniture store in Kensington High Street – because of rationing there wedding cake was a 6 month old Christmas pudding!  Their honeymoon was a trip to the cinema to see a film called “Married but Single” they returned to their flat in Fulham only to find a bomb had gone off nearby and blown off the chimney of the house, so the whole flat was covered in soot and rubble – they where married nearly 52 years and had 4 children 2 girls then 2 boys.

My Father was a windmill fanatic, for 65 years he travelled the length and breadth of England to find and photograph windmills, windmill remains and the sites of old windmills… During these travels he took hundreds of photographs and wrote pages of information and data, he collected everything that related to mills, postcards, maps, stamps, newspaper and magazine articles etc.